Sky Bison
Flying Bison, also referred to as “Sky Bison”, live in the Air Temples and are the only easy way to reach an Air Temple. The Flying Bison are regarded as the first Airbenders, and are highly respected by the Air Nomads.

Flying Bison have five stomachs, flat, beaver-like tails, brown eyes, shaggy, white fur and a brown stripe that runs along their back, from tail-tip to forehead, where it terminates in an arrowhead. They have six legs with three toes on each foot. A fully-grown Flying Bison can easily weigh ten tons. They are revered by the Air Nomads, whose tattoos deliberately emulate their arrow-shaped markings, for inspiring the Airbending art, similarly to how Badgermoles inspired Earthbending and the Dragons with Firebending. 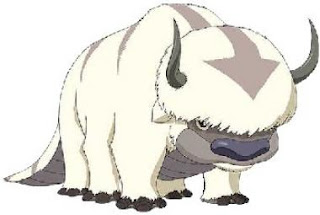 Tamed Behavior
All Flying Bison can use Airbending to fly, utilizing their broad tails to steer through air currents and also to defend themselves. They are also able to use their mouths and possibly their noses to Airbend. Though fairly docile, these creatures can be fearsome when aroused to fight.

These creatures are the main means of transportation for Air Nomads. It is customary for young Air Nomads to choose a Flying Bison to be their lifelong companion. In the Northern Air Temple, Airbenders hold a championship for Sky Bison Polo. This game is played in the air; as Airbenders rode their bison, they try to force the ball with their polo mallet into an opponent’s goal. To summon one from a far location, one may use a Sky Bison Whistle.